- a comprehensive database of rice genomic variation and its functional annotation

Imputated genotype as well as phenotype data for the population can be downloaded from the download page now.

RiceVarMap V2.0 has been published in Molecular Plant.

We have developed a non-coding variation impact prediction tool in the "Regulatory Variant Prioritization" page. Users can use the variation IDs or upload a VCF file to query the predicted variation impacts in our database. 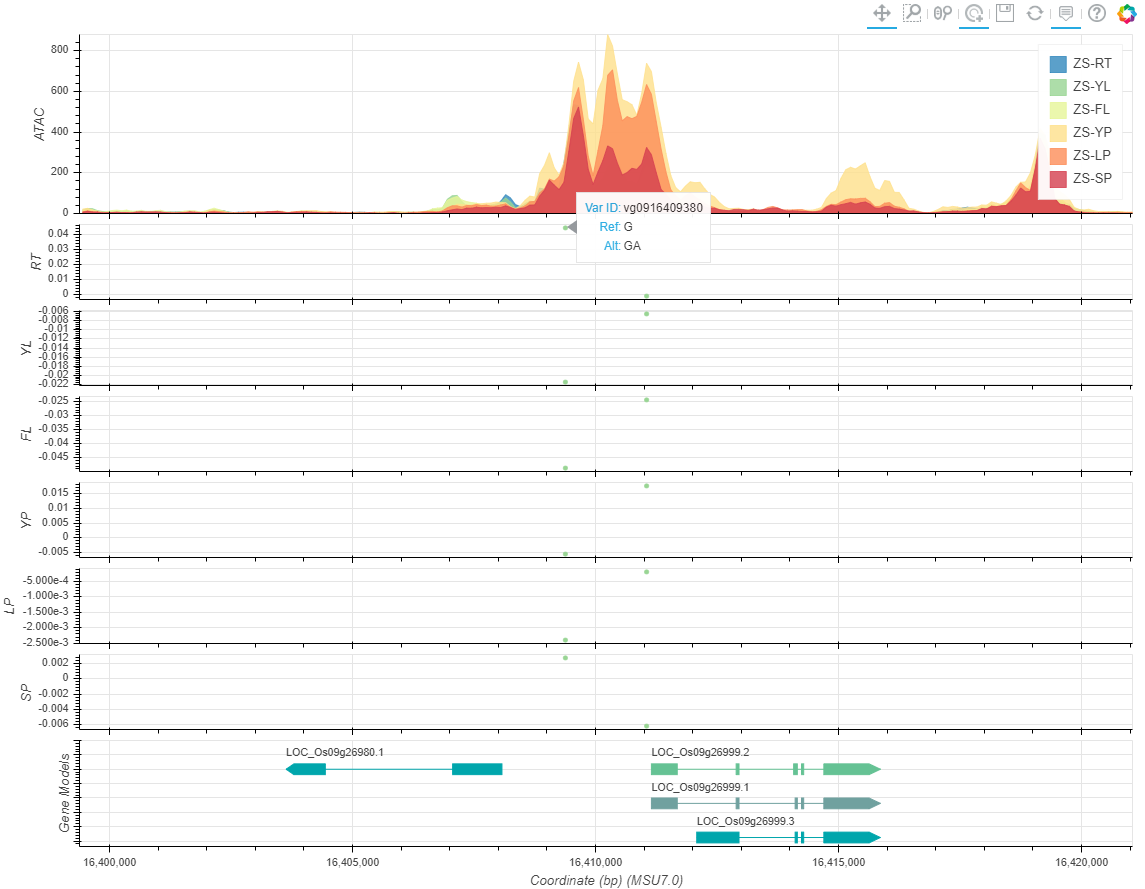 Search for Variations by Gene

Search for Genotype With Variation ID

Published researches based on data of RiceVarMap

RiceVarMap v2.0 is a comprehensive database for rice genomic variation and its functional annotation. It provides curated information of 17,397,026 genomic variations (including 14,541,446 SNPs and 2,855,580 small INDELs ) from sequencing data of 4,726 rice accessions. These variations were identified using GATK software based on the assembly Os-Nipponbare-Reference-IRGSP-1.0. (Note: you can still access to RiceVarMap v1.0 for querying variations based on the old assembly Nipponbare MSU v6.1).

High quality and complete genotype data. The genotypes of all accessions were imputed and evaluated, resulting in an overall missing data rate of <3% and an estimated accuracy greater than 99%. The SNP/INDEL genotypes of all accessions are available for online queries and download. To facilitate population genetic analysis, RiceVarMap also offers ancestral allele information and allele distribution data of subpopulations.

Comprehensive annotations of genomic variations. RiceVarMap now provides more precise variations and annotations. Haplotype-based approaches and conservatism of a segment in species were used to evaluate the impact of missense variations. To understanding the impact of variation located in the noncoding regions, we quantified genome-wide chromatin accessibility, which indicate the binding sites and the binding intensites of transcription factors. Based on these high-quality data, we then used Basenji (Kelley et al., 2018), a deep learning method to train the effect of nucleotide sequence on changes in chromatin openness. Thirdly, we used variant sites identified in rice populations and trained model to predict the variant effect in different tissues.

New query methods and more tools. Besides all functions offered by RiceVarMap v1.0, we have designed more powerful visualization tools based on bokeh and JBrowse. Specifically, for non-coding variation, we provide an online prediction tool, Regulatory Variant Prioritization, users can query the effect of variants online by submitting variant IDs in the database or a VCF file.

The first set of germplasm consisted of 533 accessions selected to represent both the usefulness in rice improvement and the genetic diversity in the cultivated species. We sequenced the 533 accessions using the Illumina HiSeq 2000 in the form of 90-bp paired-end reads to generate high-quality sequences of more than one gigabase per accession (>2.5x per genome, total 6.7 billion reads). These raw data is available in NCBI with BioProject accession number PRJNA171289. We provide phenotype images, agronomic and metabolic traits for these accessions.

The third set of germplasm was 3024 rice accessions from The 3,000 Rice Genomes Project (2014, GigaScience, 3:7) that were downloaded from the EBI European Nucleotide Archive (accession number PRJEB6180), and unpublished resequencing data from 219 rice accessions, which has an average sequencing depth of 14x per genome.

For any questions please contact Hu Zhao (zhaohu [at] webmail.hzau.edu.cn).

The recommended browsers are Chrome, Firefox, Safari, and Edge ( IE8 and earlier have poorer support and may give a lesser experience).

Researchers who wish to use RiceVarMap are encouraged to refer to our publication or more: